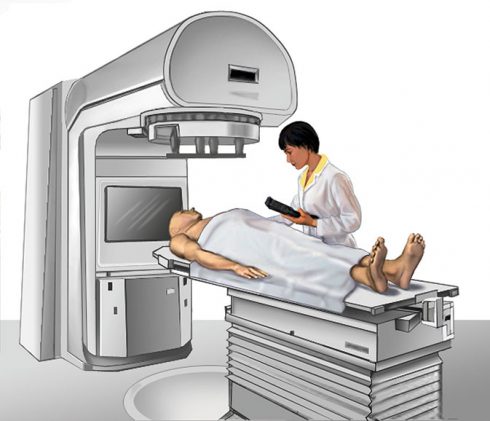 On February 12, 2019, I received the results of my PET scans and learned that I had a really large tumor on my hip. My doctor recommended that I should have radiation done on my hip to help reduce the size of the tumor, as well as reduce the pain.

Radiation therapy is a type of treatment for a disease, using x-rays, beams of intense energy, and other similar forms of radiation.  I scheduled five appointments for my radiation. At the first appointment, they mapped out exactly where they would perform the radiation. They did this by using x-rays to find the best location to use the radiation on my hip. After they found the location, the doctor placed four tattoos on my hip. They do a tattoo the size of a needle tip, that way the next time you come in they can get you into the correct position. Now that I was all mapped out and in, they can get you into the correct position for the first treatment.

Now that I was all mapped out and in the correct position, it was time for my first radiation treatment, I had to lay down on a flat, hardboard and hold my hands above my head. The radiation technicians then left the room and started the treatment. A large machine spun around me on the board, and I could hear a “Zapping” sound being made while I was on the board. Then about fifteen minutes later, it was over.

These steps did not hurt at all, but of course, as with any other treatment, there were side effects. Unfortunately for me, I experienced all of the side effects. I did, however, have chemotherapy twenty-four hours prior to starting my radiation treatment though, so my body really was enduring a lot. The side effects that I experienced were a ton of fatigue, lots of vomiting, and more pain in the area that they were doing radiation on. The back-to-back treatments had caused all my counts to drop to zero, and I ended up being admitted to the hospital.

When you get admitted to the hospital for symptoms like mine, you are considered to be entering or already entered a stage called neutropenia, which is when you have no immune system. At the hospital, I experienced many high fevers, low counts, and lots of test being done! I will find out the results if my radiation helped on my next set of scans!

YOU CAN MAKE A DIFFERENCE.

Tell others in our community about yourself and your journey, and consider sharing great moments and lessons learned to help them become MORE THAN cancer.Share Your Story & Help Others!